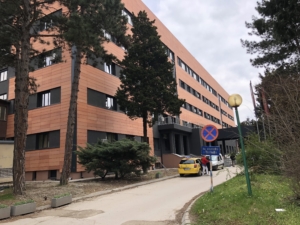 Dr. Milan Matejić, newly appointed director of the health center in Smederevska Palanka, contacted SAMA in December 2020. Immediately after his appointment he started knocking on many doors, trying to secure help that is desperately needed for his HC.

The municipality of Smederevska Palanka has about 45000 people. Like many municipalities in Serbia it was struggling after the communist economy collapsed. Goša, an economic powerhouse in the former Yugoslavia,  which was employing more than 8000 people in its heyday, today employs only about 800 people. There were for example problems with water supply, resulting in frequent water restrictions, there was no street lighting until very recently etc. Fortunately there is progress, and there are some new factories that were opened recently.

According to Dr. Matejić, over the years there was very low investment in the HC resulting in the car park that is very, very old and expensive (or even impossible) to maintain, and lack of even the very basic diagnostic equipment. Like many HCs in Serbia, HC in Smederevska Palanka has many regional outposts with at least one (and in the bigger outsposts even 2) doctors assigned to it. Hovewer, some of the bigger ones (e.g. Azanja, Kusadak, Kolonija) are missing even basic 3 channel ECGs.

Then there is no radiologist in either HC or the Hospital, which resulted in all screening programs being stopped. Fortunately there is a doctor from the HC currently doing specialization in radiology which will help in the future. In the mean time, other doctors are trained to do basic diagnostics with an existing ultrasound from 2014. However, this system is lacking many probes, questioning whether it is wise to upgrade the existing one, or procure a new one.

Dr. Matejić and his staff will decide on their priorities and come back to us.